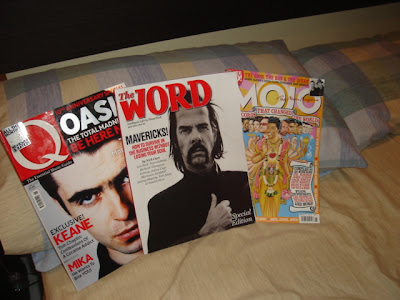 This question has been on my mind for a while. As you can see, I have a very busy, complicated life! I have 3 music magazines subscriptions, Q, Word and Mojo. I've been off sick with a stomach bug so I've had plenty of time, lying in bed reading, to consider this question of great importance to the future of the music industry (and humanity in general).

I've had a subscription to Q since June 1998, with Word since September 2006 and with Mojo since March of this year. I didn't discover Word until last year because it’s not distributed around here. I've purchased Mojo on and off for a few years but only when I like the month's contents. I purchased the Mojo subscription because they had a really good deal (12 issues, 3 Beatles special issues + Beatles DVD for 39 sterling. I would have spent more on buying a few individual issues during the year so I went for the subscription - only to find that the 3 Beatles special issues had been combined into a book which I had been given as a present for Christmas, aaaaargh!).

I'm not a great fan of Mojo because I'm simply not of the target market they are aiming at, i.e. music fans born before 1960, mostly into 60s and 70s. Mojo is for the big brothers or parents of Q readers.

Mojo also does these silly lists. This month its '100 records that changed the world'. A few months back we got '50 albums that launched a quiet riot'. Oh come on. Both Mojo and Q are produced by the same company and the similarities are obvious.

I should point out that Mojo's monthly list of recommended music retailers is badly out of date. I check out all the web sites on the list and about 70% of them don't exist anymore (if they ever did).

Q has a star rating system for its album reviews. I like the fact that I can get a quick idea of a wide range of new stuff (and then look for more in-depth reviews of those releases that interest me more from another source) but recently they've gone a bit mad and are handing out stars all over the place (awarding both Razorlight and Muse the maximum 5 star classic album rating in the same month!).

I'm not too gone on Q's interviews either. They tend to get privileged access to many of the musicians they interview (often meeting on a number occasions for the one interview) but the analysis rarely goes very deep and they often fail to ask the important questions, instead often relying on how the interviewer interprets the interviewee's body language.

Q is very much a music magazine for the 90s music fan, who thinks the 80's were shite for music, and who wants to keep up with what's going on at the moment, but knows that no one will match heyday Oasis and/or Radiohead.

But still I'll continue my subscription and I look forward to having a read of Q while sitting on the bog or waiting at the dentists.

Although I've only read Word since last September (although I've ordered a few back issues since then) I'm really impressed. Its free cover CDs are well worth listening to every month. Its got a small business/cottage industry feeling to it. You can imagine there being only about 6 of them putting the magazine together in a small dusty office, with large stereo system and reliable coffee machine and all 6 of them going mental to finish it on time every month.

The don't have a star-rating system for their album reviews. This took a while to get used to as I was used to Q's quick and to the point star-system (also used by Mojo and Uncut magazine). Word often reviews 2 or 3 albums together in the same review and finds the common link between them. Their reviews are never predictable and seldom biased. Their interviews are interesting and varied.

The only thing that bugs me about Word is the lack of a spell-checker. They need to employ someone with an eye for detail to read the whole magazine and fix any spellings and delete any extra words (and, or, even, an, etc) before going to press. It’s a small thing but it interrupts the flow of what otherwise is a great music magazine.(By the way I don’t have an eye for detail and so excuse the typos). In fact, for once I agree with the slogan 'More than a music magazine'. Word also reports on non-music topics and generally tends to identity the type of non-music subjects that music magazine readers will want to know about.

So, so far, it has to be Word, but I won't be canceling my Q subscription for the meantime, its still a good second best. On an interesting note, the main players in Word magazine (David Hpeworth and Mark Ellen - I remember wtaching them on the Whistle Test in the 80's) were the very individuals who set up and launched Q and Mojo. And their reviews editor (Paul Du Noyer) is also a former editr of Q and Mojo. So there.

By the way, as for NME, I'd buy it to fill the time before getting on a train or plane but I usually end up reading less than half the content.