Did you see the BBC coverage of Glastonbury 2007 over the weekend? 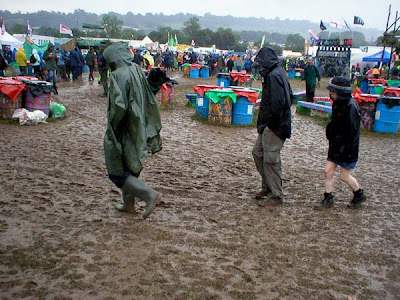 There is no fucking way that I would go to this type of mud fest. I sat there asking myself why these people go there year after year, to sit (if they can sit anywhere at all) or more like, stand in mud for 3 days. Yet from the images the BBC shows, people seemed to be having a great ol' time of it. Standing there at the front, with 50,000 people pushing from behind, drenched wet in the pouring rain. Why oh why oh WHY? If you want to see any of these bands you can catch them in concert at some stage during the year, in a smaller, drier venue.

Maybe the BBC doesn't show the parts of the festival that people really go there for year in and year out (maybe lots of sex in tents or drinking beer all weekend???). Maybe there's a lot more besides the huge mainstage concerts.

And the toilets looked appalling. I can hardly piss in a pub when surrounded by other pissing men (stage fright), imagine having a crap in one of those plastic sheds! Then again, the toilet is probably the only place you can sit down during the whole event.

Glastonbury watched from the comfort of your own arm chair isn't too bad, some of the sets are decent. I particularly liked Editors, Jamie T and the second Amy Winehouse set. Glastonbury real-life just makes me feel cold, wet, aching, tired and miserable.

I'm booking a front row seat in my sitting room for next year's concert (and there are no ticket touts in my house!). Then again, if it wasn't for all these crazy people, there would be no BBC coverage cause there wouldn't be a festival. Thanks Glastonbury goers!
Posted by Blogger at 16:12

Come out from under your shell, its like a the Dr Pepper advert says "Never no until you try it". You may just find what you been missing all these years.