Shakin Stevens: Get them young and they're yours for life. 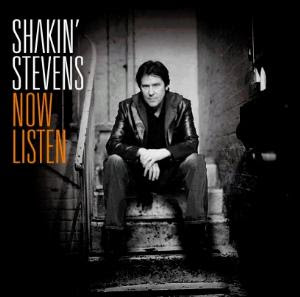 The new album by Shakin Stevens finally gets a release.
Shakin' Stevens was my first ever concert, in June 1981. I went along with my two aunts and my older brother, who was into the Boomtown Rats, Sex Pistols, Clash etc., so he wasn't very impressed. Anway, I was hooked right from the beginning and couldn't wait to buy his album, 'Shaky', which I still regard as a classic pop record and listen to regularly.

I bought all his singles, despite the ridicule of my classmates until about 1985 when I was well over my obsession and lost interest as Shaky moved into his wooly jumper period. A few years later when I started earning I bought up his remaining records in order to complete my collection, and I still keep an eye on an unofficial, but very informative, fan web site called Forevershakin. They organise a couple of Shaky Partys every year and put the (hilarious) photos up on the website. They all look like a bunch of late 30 year olds (more like going on 40) that are stuck firmly back in the eighties, dancing their bendy leg dances at a school disco. But I can't help thinking that I would have a great laugh if I went along. 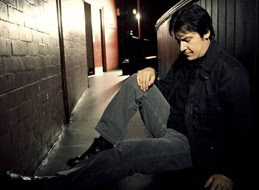 Shaky in 2007 resting his bendy knees.

His official website is really crap, poorly designed and very seldom updated. In recent years, in the interviews I've read, I can't help getting the feeling that the man, Shakin Stevens, feels slightly embarrassed about some aspects of his past, particularly targeting the Saturday morning kids TV market. Nowadays he promotes his music as country rockin' blues and says that he has moved on. Fair enough but most of his fans still want the denims, black shirt and white shoes Shaky that they love.

So here it is at last, the album ‘Now Listen’ just released in and already number the album charts there. I wonder what the title means? Is he trying to tell us something? Shaky was never known for the depth of his lyrics (Wo Wo Julie, If you love me truly, do you want me Julie, to be, to be, to be, your very own) or album titles (Shaky, The Bop Won’t Stop, Lipstick Powder and Paint).

I bought the album today from HMV online. Old habits die hard. I've only heard the one song, the title track, and its not much to write home about but the thing is that there is no way I couldn't buy this record. I was hooked as an 11 year old and at 37 I'm still going to by whatever new material he releases. In marketing terms we'd probably be talking about 'customer loyalty'. I wonder how many of the albums sold in are thanks to ol' farts like me, and how many are from music lovers who heard this new album and loved the music.

Anyway, I’ll post a review of the album as soon as it arrives and I’ve had time to hear it. Can’t wait!!

Well,i am 38er,also a fan up and down since the eighties,and i think his new album is wonderful!
His voice is nicely polished,and sounds great.
Not to mention the rest.
Ofcourse he was hot in his denimwear,but i respect his choice of 'moving on'.
It is nice to see though,many people in the audiences of his concerts,are in their(early) twenties,so prooves the man still has what it takes.
He still rocks my heart too.

Hey, head over the Forevershaky messageboard now and log in.
We're talking about you...

There are a few different ways to do a reverse cell phone look-up.

You can Google the phone number, use quotation marks around the number in your search.

This may not be the most efficient option, but it will allow you to
check out any info if the number has appeared elsewhere on the internet.
Especially if this number is related to another business
or website, it should be easy to locate more info regarding
the place of origin. For a start, its best
if you consider the frequency of which along with the distance that youre actually traveling.
If you are spending the vast majority of his days, close to at home, you should not be any basis for leaving their concerned with visiting a particular area, that was within most cheap mobile phones vendors.
When you are capable to cheaper mobile phone plan will do just fine, as you do not have any free roaming
plan for the email. Nevertheless , you should keep as the
primary goal that a local calling area, call your cellular phone
will be expensive! http://tinyurl.com/bx5hgfb Martin said at
the news briefing that consumer groups "still have concerns" about the proposal.
Of note, Orange buys used mobile phones. Half the game is figuring out
which sites are the least hassle for the most cash return.
When I last sold mine, I didn't go for the top price as the terms and conditions specified immaculate cosmetic appearance. That kind of wording was too much of a get out clause. They lure you in with a price, then lower it because you haven't quite met the
T&Cs!
Also visit my web page ... reverse cell phone look up

We are a group of volunteers and opening a new scheme in our community.
Your site offered us with valuable information to work on.
You've done an impressive job and our entire community will be grateful to you.

Feel free to surf to my homepage; best-Friend.ir

This is very interesting, You're a very skilled blogger. I have joined your feed and look forward to seeking more of your magnificent post. Also, I've shared your site
in my social networks!

How can I combine my love from the arts, especially creative writing with a law
degree?

I'm curious to find out what blog system you happen to be working with? I'm experiencing some minor security issues with my latest blog and I would like to find something more risk-free.

Do you have any solutions?

Hi there colleagues, how is all, and what you wish for to
say concerning this paragraph, in my view its genuinely amazing for me.

Hey There. I found your blog using msn.
This is an extremely well written article. I'll be sure to bookmark it and return to read more of your useful information. Thanks for the post. I will definitely return.

Hi there would you mind letting me know which web host you're working with? I've loaded your blog in
3 different internet browsers and I must say this blog
loads a lot faster then most. Can you recommend a good hosting provider at a honest
price? Kudos, I appreciate it!

This article will assist the internet viewers for building up new webpage or even a weblog from
start to end.

At ten, girls' body fat increases in preparation for puberty. But because they are already so conditioned to believe they have to be skinny, they panic. Shockingly, ten is now the average age at which children begin dieting.

Here is my site ... raspberry ketone

What's up, I read your blogs like every week. Your writing style is witty, keep up the good work!

Thank you for the auspicious writeup. It in fact used to be a leisure
account it. Look complex to far added agreeable from you! By the way, how could we
keep in touch?