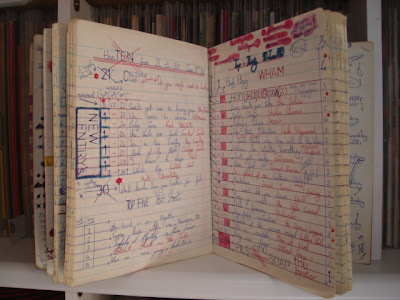 From January 1982, aged 12, I started keeping my own personal (trainspotter) music charts, until May 1984. I eventually filled three hard-back note books, stapled them together and covers them with a Culture Club poster (probably from Smash Hits or No.1 magazine).

I thought of putting this on the blog when I read on Word Magazine website abour Jem would kept a record diary of records he bought and concerts he attended from 1980-84. 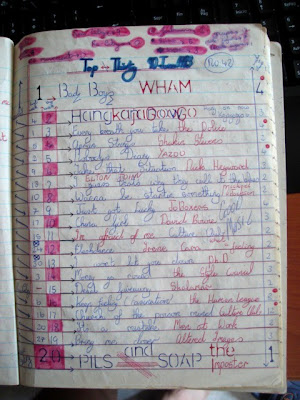 Here's my top twenty (above) for June 10th 1983. Wham number 1 with Bad Boys, Kajagoogoo at 2 with 'Hang on Now' and the Police at 3 with Every Breath You Take. Its funny to think that both the Police and George Michael are back on live circuit after so many years.

I was (and still am) a major fan of pop music. I was heavily into Shakin Stevens at the time (he's due a new album since last September but no one knows what the delay is and it keeps getting put back...oh but you don't care about that, do you?).

Anyway, this was such a great period for quality pop music that I eventually kept a Top 40, a Top 5 bubbling under hotshots and a Top 10 video chart. I taped most of the stuff off the radio and religiously compiled the new list every Friday evening after school and then listened to each song in order. On Satuardays I would give my mother a list of 3 or four singles and ask her to buy which ever one she could find in picture sleeve. I rarely bought albums cause I couldn't get the 5 or 6 quid price together at once.
Posted by Blogger at 15:09

Vooowww that's a great memory :) you should always keep them for your children, even grandchildren later :))

you can compare your pop music hits with Billboard hits of the particular years here.

Thanks for writing this.