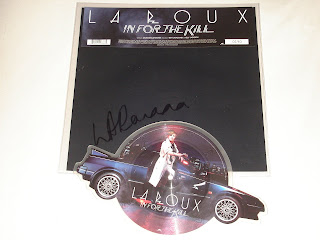 The signed new shaped picture disc single by La Roux. When I bought it online I didn't realise that it would be signed and shaped. What a great surprise.

Well I haven’t written anything here in ages. Seems a shame to have such a great blog name (I think!) and not use it. But family and life get in the way of regular updates. And such things as the current episode of the Apprentice (UK) (and other shows like Lost, Battlestar Galactica , etc) which is on in the background as I write this. What a bunch of plonkers they always are these contestants on this program. But nevertheless, it’s very interesting to watch. It never ceases to amaze me how normal they are when they’re fired and the appear on the ‘Apprentice – You’re Fired’ program.

Also, I wasn’t sure where this blog was going. It was supposed to be a diary of a music fan when in fact what really interests me is music on vinyl. And I suppose I was letting too many things influence what I wrote about and why. I don’t want anyone to know who I am so I try to keep personal information at a minimum. Then again, the music I like is probably not considered very cool. I’m a child of the 70s and a teenager of the 80’s so I like to listen to all sorts of eighties pop, even including Shakin Stevens who was my first music idol (who gives a fuck if you think he wasn’t cool, I was 11 at the time in 1981 when he broke onto the music scene and I adored seeing the guy singing and dancing on breakfast TV. I lived for his next single).

So from now on I’m going to concentrate on my vinyl purchases. Who says vinyl is dead? It’s not! In fact most people think so but I buy most of my new music on vinyl. Only recently I’ve bought the new albums on vinyl by Late of the Pier, & the Johnsons, U2, Heartbreak, The Filthy Dukes, Lady Gaga, Friendly Fires, Ladyhawke, Royksopp and White Lies. I also like to display record sleeves in my in my house.. Since I was 11 years old I’ve been fascinated with record shops so I suppose that by displaying the sleeved from the records I’m currently listening to at home I feel like I’m in some kind of imaginary record shop or art gallery. Hey and I’m 39 years old!

So I’m going to concentrate on explaining the vinyl, old and new, that I’m buying, explaining what the records mean to mean and why I bought them, and so on. If no one else reads this then at least I’ll have a record of my music purchases over time. Let’s see if it evolves or remains entrenched in the 80 and 80s revivals. I did start to but some jazz stuff when I turned 30. I somehow thought it was the right thing to do. But I got over that after a few months. Still I like the stuff I bought. Now I’m nearing 40 I wonder if I’ll have another silly 10 years crisis. 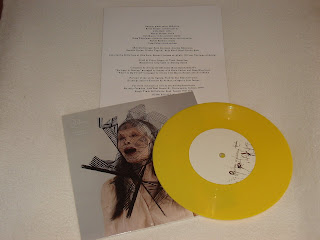 The new Antony & the Johnsons single on yellow vinyl. mmmm!

Also I’d like to highlight any special purchases such as picture discs or colored vinyl. Last week I bough the new single by La Roux and it arrived on a shaped picture disc signed by the artist! Brilliant! And the new singe by and the Johnsons is on yellow vinyl. To me its something precious, a beautiful physical format of recorded music.