Shopping for Music in Barcelona 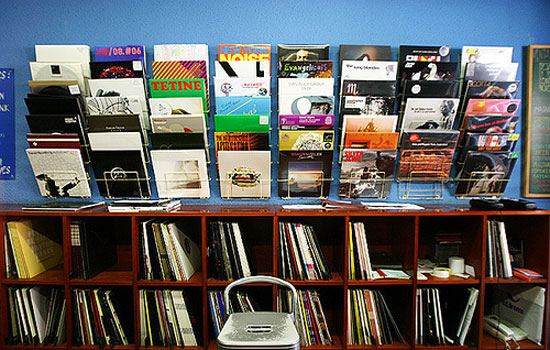 One of the things I generally do when I’m abroad is to visit the local independent music stores in search of vinyl records. It’s not always easy finding them though, or once you’ve identified a few of them it can be complicated working out the best route to take to visit as many as possible in a day or so.
Anyway here’s short guide to record shops in Barcelona. I’ll try to add to this over time and add a suggested itinerary but for the moment I’ll give you a list of where I go to and how to find them.
I've added some videos, some are in Spanish, others in English, but at least if you don't speak the language you'll get an idea of what to expect from the images of the interior of the shops.
Barcelona is still a great place to find small independent record stores and long may it stay that way!
For other review of record shops in Barcelona see:
Rate your Music
Record Junkie
Discogs
Barcelona Unlike
Spinning Wax

First Stop: Carrer Tallers
The best place to start is Carrer (or ‘calle’ if your map is in Spanish) Tallers as its right in the centre just of the very touristy Les Rambles. If you’re at Plaça Catalunya at the top of the Rambles, standing in front of say Café Zurich, then head down the right hand side of the rambles, past Burger King and take your first right onto Carrer Tallers. You’ll find at least seven or eight record stores on Tallers or on adjacent streets, although like elsewhere a few shops have closed in recent years, particularly OverStocks which had a decent buy overpriced vinyl collection.
Here's s short video on the famous Carrer Tallers

Discos Castellò (their other store Overstocks, which used to be right next door, is now closed). 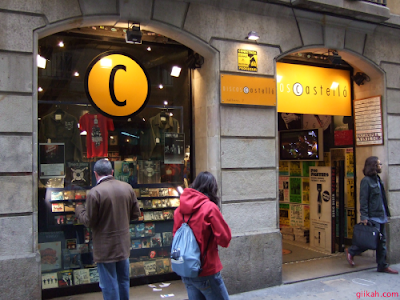 Discos Castelló
Overstocks was part of the Discos Castellò chain which originally had four shops on the street, one classical music specialist store right at the end of Tallers just off the Rambles. That’s still there but I have no idea how good it is. Then they had Overstocks (CD, vinyl and merchandise) which they closed down in 2009 and amalgamated it with their shop next-door, Discos Castellò.
This video gives you a good idea of what you'll find in Discos Castellò. Its a short interview in Spanish about the current state of the music industry.

They have a decent slection of cds although a bit pricey and a small little cubby-hole section with vinyl and t-shirts. Its worth a quick look but don’t waste too much time here. They have a fourth store at the very far end of Tallers almost as far as Plaça Universitària. I rarely go there to be honest and I would only go there if you have extra time to kill after visiting the other shops. 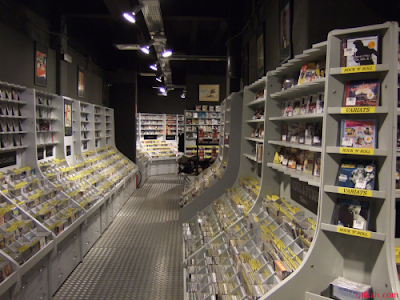 Interior of Castelló
Revolver
Open from 10:00 to 21:00 Monday to Saturday and they don’t close at lunch time.
Carrer Taller 13, Barcelona

Revolver is my favourite Barcelona record store. In fact they have two stores almost beside each other, with a traditional old men’s barber shop and a corner street separating them. I’m not sure what they story is because they seem to be two separate independent stores sharing the same name.Lets call then revolver 1 and revolver 2 (the first one you encounter after Castelló we’ll call revolver 1. They often carry similar stock, with the same record in both stores at slightly different prices. I once bought a record in the first store only to find the same record in the second store at a few euros cheaper. When I asked how this could be and whether I could get my four euros back, they made some excuses and basically said that they were two separate stores.
Revolver 1


Anyway, despite this strange arrangement both stores are well worth visiting, especially the first store you’ll encounter if your coming from the Rambles. It’s a small store with mostly cds, dvds and merchandise downstairs and a first floor full of vinyl. They have a good selection of ‘bootlegs’ (dvds and cds) mixed in with the official releases. They turn around their stock quite often so its well worth repeated visits. They shop is well ordered and its very easy to find stuff, especially on the first floor vinyl section where I tend to spend my time. They have a well stocked ‘vinyl new releases’ section and tend to have most of the new stuff, with everything from indie to Kylie. They also have a couple of boxes of new vinyl singles downstairs which is worth looking through. They stock a wide range of vinyl from punk to jazz to symphonic rock to motown. The prices are in general very reasonable. New vinyl releases go for 14 to 22 euros. The second hand stuff is priced according to its condition, from 1 euro to full price. 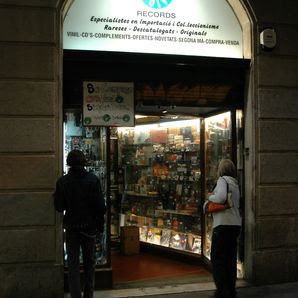 Revolver
In general I find the staff in record shops in Barcelona quite typically Catalan (which makes sense as most of them are). They’re not particularly friendly and won’t engage you in a conversation about your purchases or anything near this, but they tend to know what they’re selling and if you ask them for help they’re glad to assist, although you won’t make any new friends (except for one or two exceptions which I’ll get to later).
By the way, if you have no Spanish or Catalan language skills you’ll generally get by with English. I don’t know anyone in these shops who speaks good English except maybe in Cd Drome) but they have enough to help you out. 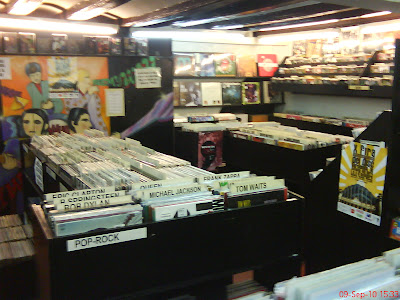 
This store has a very different feel, but I also like it a lot and always head there after visiting revolver 1. They seem to have a good heavy metal section as you enter the store but I know very little about this type of music so I shouldn’t say too much about it. The vinyl is hidden away at the very end of the long narrow store, beyond the t-shirts and up a step to a separate room. You’ll also find a couple of boxes of new vinyl releases just beyond the first section of the store. 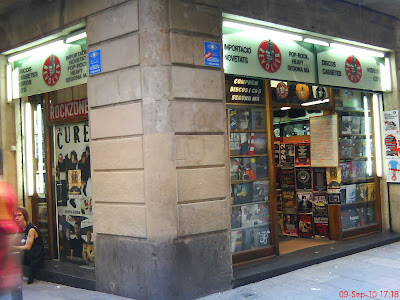 The other Revolver
They used to have a really well kept electronic music section, between say 2000 and about 2008 but recently they seem to have less new electronic releases (maybe it reflects a downturn in this genre). Nevertheless the do have a decent vinyl section. Check out the eighties section if you’re into synth pop, new romantics, etc. They also have a display unit of vinyl singles which has some interesting stuff. The staff are friendly here too and the prices are very decent. If you have time on your hands you can down on your knees and shuffle through the many bargain bins with old vinyl for a euro or two. Sometimes you’ll find some interesting stuff, although you’ll have to plough your way through a lot of shite too.
Daily Records 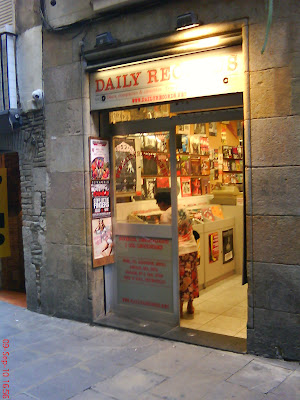 At this stage its worth leaving carrer Tallers and taking a short detour down Carrer de les Sitges, which you’ll find between the two stores of Discos Revolver. Just down carrer Sitges you’ll find Daily Records. This is a great little store with a wealth of vinyl in great condition at decent prices. Daily Records is a specialist in punk, post punk and ska. If you’re into the UK music scene from about 1977 to 1981, this is the place for you. The store owner is a good guy with a real passion for what he does. They also have a small selection of t-shirts worth a look. 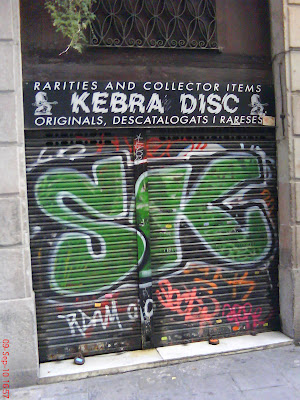 A common sight, Kebra closed.
Kebra is a strange but interesting shop, which you could also say about its owner. In fact, he one of few of the record shop owners who you can strike up a conversation with in Barcelona. He’d talk the hind legs off you , but he’s also selling records to you and I always leave this place having spent more than I had planned! The only thing is the opening hours are limited and tend to vary, so half the time I find the place closed. He has a good collection of vinyl in good condition at fair prices. You might even find a hidden gem in here somewhere. He’s got everything in the shop on his PC so if you can’t find something then just ask and he’ll be glad to help out. 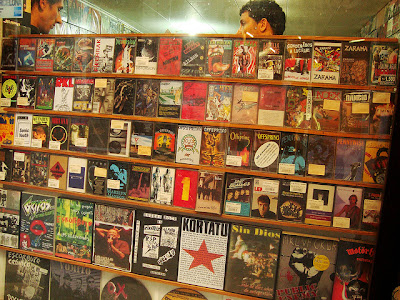 A selection of music in Kebras window. 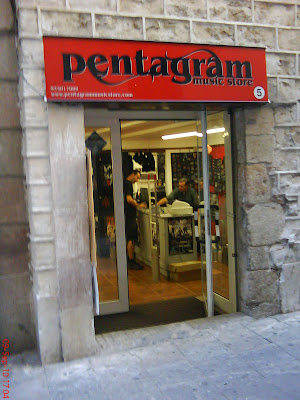 There’s a new record shop open on Carrer Sitges, just between Daily Records and Kebra, called Pentagram Music Store. It’s a specialist  shop in everything heavy metal (which I know nothing about), so if you’re into heavy then is well worth a visit. I think the owner used to work in Overstocks.
Along Carrer Sitges you’ll find a few more shops, which although not record shops, they do carry some vinyl, but mostly specialise in t-shirts and other clothing.
Head back to carrer tallers and turn left to go past Revolver. Walk for about 3 to 4 minutes and you’ll find our next stop Discos Impacto. 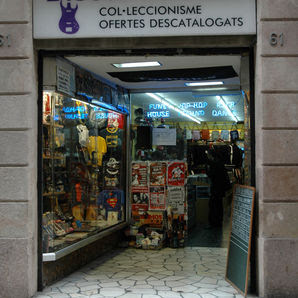 Discos Impacto
Discos Impacto have two stores one in Carrer Tallers and the other in carrer Sant Pau just round the corner from the opera house. Impacto in carrer Tallers has a large vinyl collection. In the other room you’ll find an A to Z of all musical styles, pop-rock, 70s’, 80s and 90’s, all second hand vinyl but in good condition. The have a large selection of bootleg vinyl albums and some very very rare stuff indeed. In the back room they have a wonderful selection of mowtown, soul, funk and rap on vinyl. 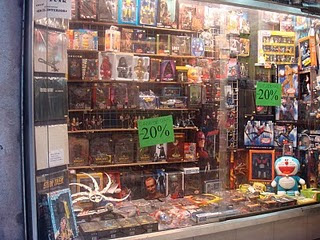 This shop is well worth a visit. However there are two factors which I don’t like about this shop and its why I rarely go in there. Firstly the staff are very unfriendly. Secondly the prices are a bit crazy, especially for the bootleg vinyl. Its just really silly expensive prices. 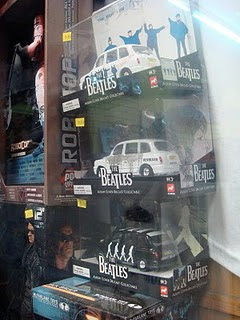 Someof the merchandise available at Discos Impacto
Cd Drome
C/ Valldoncella, 3
08001 Barcelona
+34933174646
info@cddrome.com
Mon-Sat, 11:00-14:00, 17:00-21:00
Cddrome, despite its name has a great selection of vinyl, as well as a well cosen cd selection. This is a shop owned and run by young people who know their dance and electronic music, yet there is absolutely no snobbery here. The staff are friendly and more than willing to help you out. This was one of the first shops in Barcelona to install record players for you to listen to the records. Its because of this shop that I got back into electronic music in the early 2000. This is where I learned about Miss Kittin, the Hacker, Kisune Maison, Tiga, Ladytron and a ton of other electro, electro-clash, and electronic music. And the prices are generally very competitive. They have a weekly newsletter which updates you on their new arrivals, which is very useful.
This is the place to go for indie and electronic music in Barcelona.
If you go back towards Carrer taller and continue you’ll come to the other Discos Castelló just before Plaça Universitària, although I’m not sure iuts really worth the time as they have nothing you can’t buy in the other shops.
...to be continued, updated and improved....
Other stores
Music Ages
C/ Torrent de L'Olla, 31
08012 Barcelona
+34935019317
Mon-Sat, 10:00-14:30, 17:30-21:30
Discos Juandó
C/ Giralt el Pellisser, 2B
08003 Barcelona
+34678549257
juando.vox.com
discosjuando@hotmail.com
Tue-Fri, 11:00-18:00; Sat, 10:30-15:00
Metro Jaume I
Blog http://discosjuando.wordpress.com/
Discos Paradiso
Ferlandina, 39
08001 Barcelona
+34933296440
discosparadiso.blogspot.com/
discosparadiso@hotmail.com
Mon-Sat, 11:00-21:00
Here's a video on a trip to Discos Paradiso
Discos Edison
C/ Riera Baixa, 10
08001 Barcelona
+34934419674
www.discos-edisons.com
pedidos@discos-edisons.com
Mon-Sat, 10:45-14:00, 16:45-20:30
Video on edison

To be continued, finished, modified, etc...!